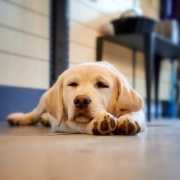 Giardia is a small organism (protozoa) that can infect both humans and animals.

Dogs are particularly affected by the disease caused by giardia.

What are the symptoms of the disease?

Diarrhoea is typically seen in the dog. The stool is often light colored and slimy, perhaps with blood. There’s often a historic where the stool has been alternating in consistency.  The owner often describes, that “the dog has been eating something dirty”.

The dog is often described as sometimes sad and with a changing desire to eat.

Giardia is a disease that can occur in many disguises.

How does giardia infect?

The dog is infected if it consumes giardia cysts.

Giardia is excreted with the dog’s feces. The infection therefore occurs, if the dog consumes giardia at e.g. drinking from a contaminated puddle of water or licking some stool containing giardia.

It takes 5-12 days from a dog gets infected with giardia to it might show signs of illness.

The cysts are the form that infect animals. The dog eats the cysts that reach the stomach.

From here, the cysts move to the small intestine, where they develop into the stage “trophozoites”

It is the trophozoites who make the dog sick.

The encapsulation is believed to occur by means of the pH of the intestine and bile salts.

Cysts are excreted with the dog stools. Trophozoites can also be excreted in feces, but they do not survive and do not help to spread the infection. It is the cysts that spread the disease.

Who is affected by giardia?

The disease is often seen in young dogs, or in dogs where the immune system is under pressure perhaps due to other illness?

However, the disease can affect ALL.

So, can one speculate whether a general immunosuppression and stress can be part of the triggering factor for the secretion of the cysts? Similarly, dogs under stress may be affected harder by the disease than others.

Not all dogs infected with giardia will develop symptoms of disease.

How does giardia affect the dog?

The mechanism behind the damage is not known precisely, but the theory is that giardia does affect the intestinal surface. Some toxins are released and the intestines ability to convert food changes.

There is also often an overgrowth of commonly occurring intestinal bacteria in the intestine, which can also make the dog sick.

The diagnosis is made by testing the stool from the dog. Many veterinarian clinics can do the test themselves. The diagnosis can be made by detecting both trophozoites and cysts.

However, we cannot be sure of the result, as the cysts are separated periodically.

If the dog is negative in the test, we can be “unlucky” to have hit a time where there is not excreted cysts.

The cysts are very vigorous and resilient:

There is no treatment that is a 100 % sure cure for pets. Because of giardia’s way of life, it can be very difficult to hit it.

We focus on several areas: medicine and prevention of re-infection (the dog is infected again).

The vet will typically prescribe either a anti-parasit drug or antibiotic as part of the treatment. There is not one type of medication that is a sure cure treatment.

If a dog has giardia, the dog often infects itself again and again.

Giardia is highly contagious, so it imposes an ethical responsibility on the dog owner to prevent the spread of the disease.

Ideally, the dog is moved from home until the house is cleaned and disinfected, and the dog has finished the treatment. However, it is a practical challenge for most people. You can handle the problem with careful planning and execution.

You have to be very careful when you pick up the dog’s stool. Do not allow the dog to run freely in the garden or elsewhere before it has relieved itself, as it helps to avoid spreading the infection. Wear gloves when handling the stool as it can infect humans. Get the stool in a plastic bag.

Since giardia is excreted with the stool, cysts can easily settle in the coat. The dog can easily lick them in by regular grooming.

Wash the dog’s coat in chlorhexidine shampoo 4%. Particularly down by the bum where the stool can leave small traces. Wash the bum each time the dog has had its stools. Remember to wear gloves.

Keep an extremely good hygiene. Clean with soap and rinse well, so no stools are left if the dog has had diarrhea in the home.

You can use Virkon-S as a disinfectant in the home (can be purchased from several places online). Allow the area to dry completely for several days before using it again.

Wash and disinfect potentially contaminated items such as toys, water bowls, dog basket, floors, etc., as long as the dog has symptoms of disease.

Wash the blankets and quilts in hot water and then dry in the dryer at the highest temperature for 30 minutes.

Use a steam cleaner to clean the home thoroughly. Can be easily used for cleaning the car, carpets and other places where the dog is lying down.

As described, giardia can be a disease that is difficult to treat. Many factors are at stake for success.

It is often seen that, despite repeated treatments, the dog tends to have a poor stomach and the energy level is not top notch.

It is therefore important for the recovery to think all the way around.

Giardia affects the intestine. There is therefore a need to do everything to strengthen the dog’s digestion.

During the treatment, the dog must eat a sensitive diet, so the possibly damaged bowel is impacted as little as possible. The food should contain some good fibers that strengthen the digestion in the intestine. There are many commercially produced diets with extra fibers.

Alternatively, the food can be added to the product “Profibre” which is available from the vet.

WE would recommend giving the dog a dietary supplement with lactic acid bacteria during and after treatment. In this way the intestine is strengthened.

If the dog has suffered from diarrhea for a long time, it is common that it is in deficiency of folic acid and vitamin B12. Both parts are absorbed from the intestinal wall.

The dog can advantageously be given a supplement with folic acid and vitamin B12, which is essential for many functions in the body. You can get a combination product that contains both at the vet.

The mechanisms behind the release of giardia cysts, as mentioned, are not fully established.

A dietary supplement with essential fatty acid can also be a good idea so that the immune system is controlled as much as possible.

Has your dog been diagnosed with giardia, and do you and your vet have trouble getting rid of it? Then it is a good idea to look at the dog’s everyday life and psyche. Is the dog stressed or is it thriving?

The word stress is  some times used incorrectly. In this context, I look at stress as a condition where there has been or is a continuous accumulation of stress hormones and chemicals in the body. It does, the dog’s nervous system is under pressure, so the body does not get rest and the opportunity to recover.

Review the dog’s everyday life. Think about maybe taking some shorter walks, not letting the dog get too “excited”, let it sniff some more and give it peace to rest and sleep. A little peace for us humans may need by all.

Health and psyche are connected. If we think all the way around it regarding the treatment of giardia, then we get the best result for the benefit of dog and owner!