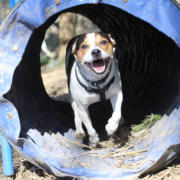 Are you the happy owner of a new puppy, there are a lot of things to look forward too.

One of the greatest pleasures of owning a dog is the walks that you will experience together. However, it will take a while before this becomes a part of everyday life.

The puppy takes over the house with its energy which will test your patience. This might lead you to think that the puppy needs to be worn out physically and what better way to do this than to take the puppy for a nice long walk?

STOP – a puppy should NOT be taken on long walks or be worn out.

A puppy needs a lot less exercise than you might think. The puppy only needs to go out for short walk to relieve itself.

When the puppy arrives at its new home it is usually between 8-10 weeks old. However the most optimal time to move the puppy from its familiar surroundings is actually when the puppy is between 9-11/12 weeks old!

How much exercise does a puppy need?

During the first month of bringing the puppy home, it only needs to go out for 10-15 minutes a day.

As part of the housebreaking it is natural that the puppy needs to go out many times during the day, which is fine, but it shouldn’t be taken out for walks. The puppy only needs to go out to relief itself and the sniff around in its new surroundings.

A puppy will relieve itself where it feels safe, which is why puppies often relieve themselves inside the house or in the garden. This is also one of the reasons why the puppy shouldn’t be taken for long walks, as it will not relieve itself if you just walk around in different places.

When you take your pup out for a walk it should be on its terms. It’s very important that the dog gets to sniff around as much as needed. This means that you should make as many stops as the dog requires and wait for the dog to finish sniffing.

Stress has a lot of consequences for the puppy and can show itself in many disguises.

Typically the puppy will be unfocussed and have trouble relaxing and resting, it will pee excessively, it will hump object, which has nothing to do with its sexuality and it will drink a lot. The puppy will also take longer to learn to be alone at home as well as it will take longer to be housebroken.

If you have a garden, it is easy to let the puppy out several times during the day. Have in mind that even a small trip to the garden, is a major input for the puppy’s brain to process.

From a puppy’s point of view, a small experience makes a huge impression, a lot more than you might think!

A puppy should only be exposed to new experiences every three to six days, which ensures the most optimal development of the puppy’s psyche.

Making an effort and giving the puppy time to a just, will give you the best result for a harmonious healthy dog.

We as humans can also benefit from slowing down. If you want to do what’s best for the new family member it’s important to calm household and give the puppy time to a just.