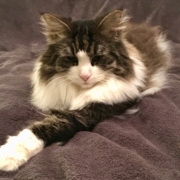 My cat’s losing weight, despite of eating. Could he be sick?

Earlier this year Artemis got a visit from Fidus. Fidus was the most wonderful Forest cat age 14 who has always been healthy. The owners of Fidus had noticed lately that she had started to lose weight despite a healthy appetite. She drank a bit more than usual and slept some more. That, the owners of Fidus found to be consequence of Fidus’ senior stage.

The owner worried it could be renal failure, which is often seen in older cats.

We did bloodwork, which fortunately showed normal ranged kidney- and liver numbers. Further the test showed a higher metabolism.

Higher metabolism is a hormonal illness, where there is formed too much metabolic hormones in the body.

The metabolic hormones are formed in the thyroid gland which is located in the front of the larynx.

The hormones of the thyroid gland make the body convert energy to breathing, heart activity and heating. The gland is very important for the whole body. In all cells of the body there are receptors for the metabolic hormones, which means if the production of hormones is not enough, then the body won’t work optimal.

T4 is a sort of a “mediator” which works when it’s converted to T3. The conversion takes place in an enzyme in the body. If no T3 is present in the body, then you won’t feel good.

The creation of metabolic hormone is dependent on the present of iodine.

The thyroid gland is controlled by a part of the brain which is called hypothalamus. Here are the TSH (thyroideus stimulating hormones) which tells the thyroid gland to produce more or fewer hormones. If too many hormones, then the concentration of TSH is lowered and too few, then it’s elevated.

How to set the diagnosis?

It’s diagnosed by bloodwork where a content of T4 hormone is counted.

Often the clinical symptoms of the cat will tell what to look for. Sometimes we can feel the glands on the throat being enlarged.

Hormonal illnesses can occur in many different disguises and they don’t follow the norm from the books.

The symptoms of the metabolic disorder can be a variety. Often the owner will notice a changed behavior of the cat. Maybe it becomes more restless, a bit more nervous and drawn back from its family. Some are found to be more blunt, a state connected with ageing.

The cat drinks more, with that pees more and maybe got problems with digestion.

Its coat turns dull and mat looking and maybe scruffy.

The pulse will rise which is the cause of some of the symptoms.

Can it be treated?

If the illness is not treated, then the cat won’t survive. Fortunately, it’s easily treated.

The most common is pills containing thiamazole.  Thiamazole prevent the creation of metabolic hormones by impeding the connection of iodine to an enzyme (thyroid peroxidase) .

Pills are to be administered 1-2 daily.

To remove the gland by surgery is another option. We administer pills during the time right before the surgery to reduce the gland and to strengthen the wellbeing. Post-surgery we do regular bloodwork to make sure the dose of medicine is correct.

Because of the good results with pills then surgery is less common now. If it’s impossible to give the cat pills, then surgery can be considered, if the cat otherwise is well.

There has been developed a special diet for cats with higher metabolism. It contains a small amount of iodine, which as mentioned is essential for the formation of metabolic hormones. In the most cases it’s not “just” enough to give the food.

What happened to Fidus?

Fidus got in treatment with medicine. She came back for checkup where we concluded the dose of medicine was just right. Fidus is soon 16 years old and doing well despite her age taken into consideration.

Do you have an older cat who has lost some weight? Many will say “but he eats well, so there can’t be anything seriously wrong”, then still bring him to the vet for a checkup.

Cats with higher metabolism will get an increased better life with the treatment and can enjoy their senior life to the fullest instead of spending their energy on keeping themselves alive.