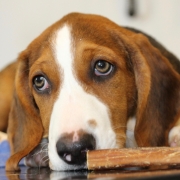 What is kennel cough?

Kennel cough is the term for an illness complex, which gives an infection in the respiratory tract. Kennel cough can be caused by different types of virus where the canine parainfluenza is the most common.

At times the illness can get worse due to the bacteria Bordetella brochiseptica.

What are the symptoms of kennel cough?

The symptoms of kennel cough are a dry resounding cough that terminates with the attempt to throw up slime. Other symptoms are fatigue, smaller appetite and drinking more than usual. The cough sounds like a seadog.

Because of the typical “vomit”, then it’s understandable that the owner assumes the dog tries to throw up something it has swallowed.

When the vet examines a dog with kennel cough, he sometimes finds the lymph nodes enlarged.

There can be fever (temperature above 39.3 C) and by touching the throat a cough might be provoced.  The vet will listen to the lungs of the dog to decide if there are signs of pneumonia (lung infection).

How to treat the illness?

The treatment depends on how affected the dog is. The cough can get self-perpetuating, which means the more it coughs the more the  mucous in the troath gets irritated. Typically, the cough worsens by excitement and exercise.

It’s essential that the dog is being kept calm, otherwise the infection can persists for for longer. The vet can decide to prescribe antitussive drug and in some cases antibiotics. The antibiotics only influences the bacteria. Therefor there must be an individual valuation before the vet prescribes the antibiotics. We will only use antibiotics when necessary.

We recommend feeding the dog soft moist food since, since the throat is sour and can hurt when swallowing. Lukewarm food can be a comfort to a sore throat – like a “cup of tea with honey”.

It’s recommended to make the dog wear a harness instead of a collar to avoid putting pressure on the throat and by that not provoke even more cough.

Kennel cough is a contagious disease. The virus spreads, if the dogs have a direct contact with each other. The virus can also get transmitted indirectly from the drinking water, spit, food bowl, toys and sticks.

It takes 5-10 days from when the dog gets infected, until it starts to show signs of discomfort. During that time the owner won’t know the dog is a carrier of the illness and as well a source of infection.

The dog excretes the infectious agent 1-2 weeks after it has stopped coughing.

It is typically younger dogs who get the worst infection.

Many believe by mistake, that if the dog is up to date on its recommended shots, then it’s covered against kennel cough. It’s unfortunately not the case since many different viruses can be the cause of the illness.

Can it be prevented?

Far the most dogs are vaccinated against the flu. The flu is a part of the vaccination “cocktail” normally given.

The vaccination covers for a start the dog for one year. The vaccination doesn’t cover completely 100%, but in case the dog gets kennel cough then the symptoms are milder and the dog will recover faster.

There is an additional protection against kennel cough which in daily speaking is called “The kennel cough vaccination”.

The vaccine works  against influenza but also one of the microorganisms (Bordetella broncoseptica) which sometimes appears as part of the illness. The vaccine is a nasal spray where the vet drips a liquid in the nostril of the dog.

That way the creation of antibodies is stimulated in the surface of the airway within 72 hours. After three weeks there is a full coverage against the Bordetella bacteria. The vaccine is lasting one year.

We don’t vaccinate dogs who already got the cough. Talk to your vet about the possibility for vaccination.

Some dogs don’t handle the vaccine well, which is why we don’t always vaccinate against kennel cough.

If the dog goes to a kennel?

Remember to check for heart- and lung worm!

All dogs who are coughing has to be checked for heart- and lung worms. Infection with heart- and lung worm can appear in many disguises, but the cough is a typical sign. You must collect three samples of faeces from three days in a row and bring them to your vet.