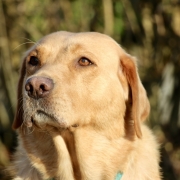 Lowered metabolism is an overlooked illness in dogs, just like we see it in humans.

Who will get it?

Lowered metabolism is an illness we especially see among purebred dogs. It’s a so-called disease of the gland (thyroid gland problem). Mixed races can also get a too low metabolism, but some races are especially predisposed. We often see it in Labradors and mixes of them as well as Dalmatians.

What happens in the body?

It’s being said, that the disease is more frequent in bitches than in male dogs. Our experience is, that there is not much difference between the sexes.

Not all dogs will get struck by the autoimmune sort of low metabolism, but only show low values in the hormones produced by the thyroid gland. These dogs might still need lifelong hormone treatment. The dogs can also be euthyroid, which means there is a condition in the body that causes low values of hormones. It can also be caused by medicine, i.e. long-term treatment with cortisone will always give a low metabolism.

How to detect the dog has a lowered metabolism?

There is no other disease that can give so many different symptoms as a lowered metabolism. The disease can come in many disguises.

The gland is very vital for pretty much all functions of the body. The symptoms can be very diverse from dog to dog.

What are the symptoms?

“I think, that my dog Monty has become so tired. He is only 5 years old, a Labrador of the purest breed and has always been so full of life. When we go for a walk, I must drag him, and he walks behind the leash. Earlier I have had a hard time holding him. Besides from that he is fine, eats and drinks. Do you think there is something wrong with the hips? Is he just getting older, or do you think there is something wrong with him?”

If a low metabolism is ignored too long, there will typically be developed more and more symptoms.

Usually the owner thinks it’s because, that the dog is getting older that the symptoms occur. It’s typical that the disease it first detected after some years.

The treatment for low metabolism is easy and low in cost. Still, there can be some dogs that are harder to adjust medically. It can be because of the above mentioned, that the dogs have a too low metabolism activated by another existing disease or medical treatment.

How does the thyroid gland work?

We can call T4 a pre-hormone, which first gets its function, when it’s transformed into T3. It takes place via an enzyme in the cells of the body. T3 is the active hormone. T3 must be present in all of the body cells, or we don’t feel good.

The thyroid gland produces both T3 and T4, mainly T4, which as mentioned transforms to T3 in the body via an enzyme.

How do we set the diagnostic?

If we have a dog we suspect is not healthy, then the most vets will do what we call “a full panel bloodwork” of the dog’s blood sample. Here we get to know how the organs of the dog work.  Is it anemic or low on other important substances?

Do we have a dog with low metabolism, is it characteristic that all blood counts are normal, but as something special we have a high cholesterol count and a too high fat count in the blood (triglycerides).

If we do a blood profile of a dog without suspecting it to have low metabolism, and the cholesterol is elevated with too much fat in the blood, then we always have to keep testing to get to know the functioning of the thyroid gland.

In a specialized function test of the thyroid gland we do a content analysis of T4 and TSH. If doing a full check of the metabolism, then we also look for T3 and thyroid autoantibody (TGAA).

Is the TGAA elevated, then we can have a genetic type that is being passed on to the dog’s offspring. Even if we tested little puppies, then we can’t rule out that they will get the disease in a later age.

It takes a lot of experience from the vet to judge when T4 is too low and when TSH is too high. We believe in keeping an eye on the T3. There are normal values, but we know all individuals are created different.

When testing a dog for the first time for low metabolism, then we have to measure all values. It means we test T4, T3, TSH and antibodies up against the thyroid gland (TGAA).

From the answer, the vet might recommend a treatment.

Here must be mentioned that many are surprised about the large amount of hormone supplement dogs will need compared to human beings. It has to be made clear that a dog can’t be compared to a human being regarding the thyroid gland.

The permanent treatment dose for many people is between 100 and 200 micrograms, where we easily can expect the dog to need 400-800 micrograms per day. We start, when dosing a dog for lowered metabolism by starting out with small amounts of hormones.

After a month the dog comes in for the first re-check of bloodwork (T4), and here we can tell if we are on the right track, or we need to go higher in the number of hormones. Since we never start out with a too high dose of medicine to start with, then we become much wiser after the first re-check.

Is the diagnose hypothyroidism crystal clear, and there are problems with the condition of the dog and the blood re-check, then we ought to test T3. That despite the owner feels a positive change in the behavior of the dog.

Maybe the dog is lacking the factor that transform T4 to T3?

What happened to Monty?

A happy owner came back for re-check after a month. “we have a new dog”. He is full of life and being spunky again after being treated with thyroid hormone for animals.

The blood sample showed that Monty still needed his medicine to be increased a bit.

We always start low in medicine, but sometimes we experience that the owner can feel the change in the dog after a first low dose. The following blood tests will confirm it.

When we think about low metabolism, we think of a heavy dog. There is also a skinny type, where the same diagnose is present.

Weight loss, change of the teeth position and as something characteristic, they can develop a “rat tail” meaning a hairless tail.

Always think that it can be lowered metabolism, if such a dog shows up at the clinic, and we notice the tail is getting thinner and thinner hair wise.