Are you also afraid that your dog may get stung by a wasp?

Read along – get advice and learn what to do in case it happens.

What are we up against?

If we should stand a chance to win over the flying fighters, then it’s important to know the enemy.

Here are some useful facts since it is easy to get confused about the many little bugs buzzing in the air.

In Denmark, we often encounter wasps and bees.

A wasp and a bee are NOT the same. A bee is hairy and wooly, whereas a wasp is smooth and skinny; a little bizarre. 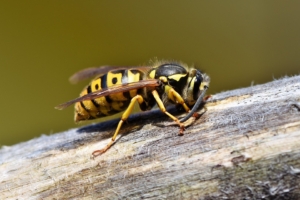 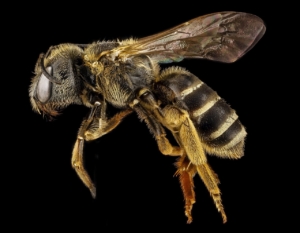 A bee is usually not aggressive.  It stings only if it feels threatened, or if you step on it.  After a bee has stung you, it  loses the stinger and dies.

The wasp is a bit more advanced. At the end of the summer there isn’t much food left for the wasps.

A bee lives on nectar, a wasp eats meat as well.

That explains why the wasp is attracted to the table on the porch, which frustrates people enjoying their family dinner. We flail our arms and legs, the wasp feels threatened, and defends itself by stinging us.

A wasp can sting several times.  They lose their patience, but NOT their stinger.

If a dog meets a wasp, it will often respond to the little flying bug. It might even try to catch it. The wasp won’t like that, and it will sting the dog in defense.

The bee pulsates more venom into its prey than a wasp. If a dog gets stung by a bee, it’s important that you remove the stinger, which has a venom sac attached. If both the stinger and the sac are not removed, then it will keep pulsating venom into the body of the dog. A wasp sting doesn’t give as large an amount of venom as a bee, and doesn’t leave its stinger.

Although the venom from the two insects are not alike, the reaction to the sting is the same.

What are the symptoms of a sting?

Typically, the dog will have a sudden change of behavior due to discomfort.

The reaction depends on where it got stung.

If it’s on the snout, then the dog will rub its muzzle against the ground.

If it’s on the body, then it will try to scratch where the stung is. If it has stepped on a bee, it will raise its paw and perhaps not walk on that paw.

What can I do?

What if an allergic reaction happens?

In some cases, the dog may get a definite allergic reaction as a result of the sting. This is the most feared scenario for most dog owners. If the sting is in the head or mouth, then you have to monitor your dog.

If the skin of the dog starts to swell up with severe itching, then you must immediately see your vet. Severe swelling can block the airway. You can give the dog an antihistamine for humans. Still, it won’t save you a trip to your vet if your dog gets or has had a reaction to a sting in the past. You can get medicine so you are prepared for the next time.

Usually there is no need to see your vet with a sting on the body since the discomfort disappears quickly. When in doubt, ALWAYS contact your vet.

There is no reason to worry about bees and wasps, just use your common sense.

Don’t let the dog put its snout into fruit which has fallen on the ground, which typically attracts wasps.

If the dog finds it exciting to watch the flying insects and tries to catch them, then distract the dog and get the dog interested in something else.

Wasps and bees call out for their friends if one is threatened. Then the dog can get a real knock out and the insects get the “last word”!

“Be careful” but do not panic in case the dog gets an insect sting.

Hopefully my words here have answered most of your concerns so the summer can be enjoyed without needless worry.