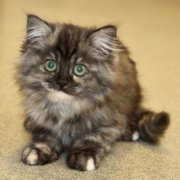 Sexual maturity of the cat

The female cat gets into heat around the age of 6-7 months. Males  get mature around the same time.

After that the female usually goes into heat every three weeks.

The heat of the cat is very different from the dog. Where the dog gets into heat twice a year, then the cat gets into heat several times during the spring- and summer season.

The cat has “induced ovulation”. It means, it won’t get ovulation before the mating. That way the cat is not “wasting” its eggs without the present of a tom.

A non-spayed female, who is out and about, will most likely get mated by a tom, get pregnant and have kittens,  if it is let outside after reaching sexual maturity.

When the kittens are born, then the female can get pregnant again almost right away – depending on the production of milk. If you don’t want your cat to have kittens again, then it must get spayed.

You can’t get birth control pills for cats anymore.

A cat not going outside will also get into heat. An indoor cat in heat is insisting, seeking contact, rolling on the floor, raising the hind in the air, “talks” loudly and is focused on finding a tom to mate with. If you have never seen a cat in heat before, then the phenomenon can appear absurd or even give one the idea that it might be ill.

Ovulation can happen even if there is not a tom around. Normal contact with the cat can trigger an ovulation, which takes the cat out of the heat.

At Artemis we spay and neuter the cats. Many cats go outside unattended. Therefor we recommend sterilizing the cat before it gets sexually mature. A tom will start to spray indoors when it gets into maturity. The non-neutered tom will get into fights more often than a neutered tom.

Many owners decide to have the cat microchipped or tattooed in the ear at the same time.

A microchip can be given without anesthesia and is recommended when the cat is allowed outdoors, or if there is a chance it can run away from home.

In the past we earmarked/tattooed the ears of the cat. It has the advantage that people can see the mark with the bare eye. Today chipping is so common, that when bringing the cat to a shelter or vet, they will always scan the cat to look for a chip before it is considered a stray.

An earmark can over time get blurred. If you take your cat abroad, it must be microchipped. Many owners put up a cat flap, which is connected to the cat’s microchip, so only the cat belonging to the house can get back inside.

The cat’s ID-marking, chip or tattoo of the ear is registered in Dansk Katteregister. When we ID-mark your cat, then we register your cat in the register. If you move to a new address, change the phone number or the cat has a new owner, then you have to report the changes to the register.

How to sterilize a cat?

The female gets a small incision under the bellybutton. Through here we remove the ovaries. The uterus is usually only removed if there are changes. The cat is closed with a suture and must come back for a check up in ten days. After surgery it is recommended to keep the cat indoors to make sure it eats, gets its medicine and the incision can heal. It will be hard for the cat to understand but hold the ground. 10 days is a short time compared to a long life for a cat.

The tom gets a small cut in the scrotum, from where both testicles are removed. The wound needs no stitching and will heal by itself under normal circumstances. The tom is to be kept indoors a few days to rest, eat and have medication for a minimum of 5, preferably 10 days.

Many chose to have the cat’s second vaccination at the same time. We prefer to vaccinate at check up 10 days post-surgery, since it is not recommended to vaccinate when the cat has been in anesthesia.