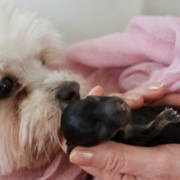 The heat starts with a swollen vagina, and we will experience that the male dogs get interested.

A heat usually lasts 3 weeks. Some bitches bleed heavily all three weeks, but typically the bleeding changes into a more yellowish secretion into the third week. The time of ovulation is different from one dog to the other, but in general it’s in the second week.

The bitch will put her tail to the side and not reject the male. The dogs must be “attached” for several minutes for the mating to end with a pregnancy.

How soon do I know if my dog is pregnant?

The vet can try and feel on the dog’s abdominal cavity. After 21 days it might be possible to feel a bit swollen uterus to indicate a pregnancy. It is hard to tell and will get even more complicated in case the dog is overweight or nervous. It’s not the most common way to tell if a bitch is pregnant.

You simply can’t tell whether it is pregnant the first weeks after the mating. About 30 days after mating, the breasts might appear a little enlarged. Especially the nipples will look a bit more marked.

How to test the dog for a pregnancy?

We can do an ultrasound of the dog about 20 days after the mating to establish the puppies. The scan can give an indication of how many puppies there are, but it can be hard to count the exact number.

49 days post mating we can do an x-ray of the bitch. Here we can see the outline of the skeleton of the puppies. This is the best way to estimate how many puppies to expect.

I don’t want my dog to have the puppies, what to do?

In case your dog got mated and you don’t want the puppies, then it is possible to administer a “terminating injection”. It can be given up to 45 days after mating, still the sooner it is administered the better.