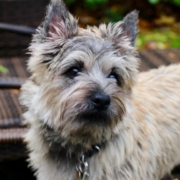 Connie, a 9-year-old West Highland White Terrier came to Artemis. Connie peed and drank a lot and had done so for a quit a while. Her appetite was better than normal, and the owner had noticed the dog had started to look really bloated. Other than that, Connie did well and wanted to go for walks and play.

An examination of the dog showed nothing abnormal except we had to agree that the dog was a bit well-padded and had a bloated abdominal cavity. We decided to do general bloodwork. The owner waited for the result.

The result was ready within 30 minutes. The owner worried that the dog could have diabetes or kidney failure, but nothing in the bloodwork showed that. The only abnormality was liver values a little higher than normal. We decided to do an additional blood test, which showed that Connie had the illness Cushing Syndrome.

How does Cushing Syndrome come into existence?

There are three different kinds of Cushing Syndrome:

How to set the diagnose?

The veterinarian takes a blood sample, where we measure the level of cortisone in the blood (baseline cortisol).

Then the dog gets an injection, which tells the adrenal glands to produce more cortisol. One hour later a new blood sample is done. If the cortisol level after an hour is elevated to a certain level, then the diagnose Cushing is clear. The test is called “ACTH stimulation test”. There are other ways as well to make a diagnosis. The ACTH stimulation test is a safe and sure method of measuring.

The large amount of adrenocortical hormone in the blood is what is causing the symptoms.

What are the symptoms?

The illness is mostly seen in dogs age 6 or older. Breeds like dachshund, terriers and poodles are more prone to the illness.

How to treat Cushing syndrome

The illness is treated with some capsules. The capsules are given daily together with a bit of food. At the start of the treatment it is important to monitor the dog regularly with blood work to make sure the correct amount of medicine is administered. We start out with a lower dose. After 1-2 months we re-test the blood to see if the dose of medicine is correct.

The control is done by a pre-vetoryl cortisol monitoring. The blood is drawn right before given then medicine. We measure here the level of cortisol in the blood. The result is compared with how the dog does on daily bases.

It’s also common to check the liver value of the dog, since they often in the first place were the ones who aroused the suspicion of the illness. These will likely lower over time to normal level. Sometimes we do an ultrasound to see what the adrenal glands look like. This is not a “must”.

What happened to Connie?

Connie got in medical treatment for Cushing. It didn’t take long before her drinking and peeing was reduced. The owner told that Connie in general appeared more alert and slimmed down around the waist. After the preliminary control of correct dose of medicine, then Connie only has to come back annually for a check up on the assumption that she does well.

Cushing Syndrome is often an overlooked illness. The possibility for treatment is today much better than just 5 years ago. Let your vet decide together with you how the treatment will take place: This is always an individual decision.

Hormonal illnesses can show up in many different disguises, so we can’t treat all alike.

The interpretation of the results should always be held up against the condition of the animal.

Today, where we google everything, we gotta remember that a dog is a living being and no two dogs are alike. Which is why the reality is not always the same as google says. Have a talk with your vet. Let the condition of the dog, the knowledge of the vet and your own point of view together create the base for the diagnostic and treatment of the dog, not what the illness is.

What Google say is not always the right answer, but it gives us a hint what maybe it could be.

You can read about Cushing Syndrome under the title “hyperadrenocorticism” as well.